What the shell? PowerVision’s new drone takes a crack at DJI 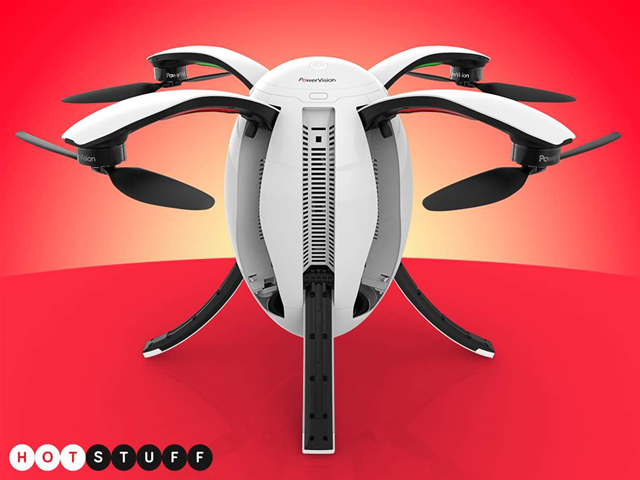 It’s no yolk – the PowerEgg is actually packing some serious drone smarts.

Are you sure that’s a drone? Looks more like an evil EVE from WALL•E

Yep, it’s a drone alright. See the rotors? Four of ‘em. That’s as drone-y as it gets. They only come out to play when you actually want to fly PowerVision’s egg-shaped UAV, though – meaning they don’t take up any space in a backpack when you’re on the move.

Clever folding rotors mean there’s no fiddly setup and teardown, either. Just unfold, power up, and take off.

That can’t be very aerodynamic though, can it? Can it actually get off the ground?

Once all four rotors spin up, it’s got more than enough oomph to fly – and fly fast. You can hit 29mph once you’re at full whack, and you won’t need to run along underneath it to keep connected, either. it’s got a massive 3km range between drone and controls.

You’ll be able to stay up in the air for 23 minutes between charges, and it’s got all the safety cutoffs you’d expect – meaning it won’t plummet to earth if you lose connection, or it gets critically low on juice.

What about that landing gear, won’t it get in the way of the camera?

Nope, it retracts back into the egg once you’re safely off the ground. Which means a completely unobstructed view for whatever you point the camera at.

Speaking of the camera, it’s a 4K resolution jobbie that can record at 30fps. Drop down to 1080p and you can boost the frame rate to 60fps, or even hit 120fps for slow motion.

It’s hooked onto a 3-axis stabilised gimbal, so your photos and videos should look pin-sharp and super-smooth. You can rotate it the full 360 degrees, too – no more flying backwards with reversed controls just to get that drone selfie all the cool kids are using as their Tinder profiles.

The remote control isn’t egg-shaped too, is it?

That would definitely make it a bit of a yolk to fly (sorry). No, it’s got a familiar twin-stick remote that you can hook your smartphone onto to get a drone’s eye view of wherever you’re flying. The app can handle waypoints and has a “follow me” mode that’ll keep the camera pointed at you while it flies forward.

If that still sounds a little too complex, there’s the easier Gesture Control. The Wii Remote-style controller has one-button takeoff and landing, a joystick to spin the gimbal, and hand gesture controls for moving forward, backward, left and right. Just hold a button to get to height, then your wildly flailing arms will be turned into gracious flight.

PowerVision reckons it’ll only take five minutes to learn, and it’s easy enough to give your kids a go with. With you attentively close by, serious controller in hand, of course.

OK, I’m ready to take to the skies. When can I get one?

Right now – PowerVision has opened up pre-orders today, and will be delivering drones to customers later this year. You’ll have to splash out $US1288 to get yours, but it’ll come with a rather spiffy backpack to carry it in if you’re one of the first few orders.

This article originally appeared at Stuff.tv